Invites Public to Participate in #HeroWOD31 During Police Memorial Week 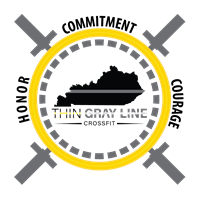 FRANKFORT, Ky. (May 14, 2019) – With over four million people across the world who self-identify as “CrossFitters,” it was only a matter of time before this revolutionary fitness model made its way into police training.  The United States Military had already adopted this style of training, but now the Kentucky State Police Training Academy is a local affiliate: Thin Gray Line CrossFit.

The Kentucky State Police joined the ranks of the other 70 CrossFit affiliates of Kentucky in November of 2018, but this style of fitness regimen has been a part of the life of a cadet far beyond that.  It was because of this reason that Captain Kyle Nall, Commander of the Academy Branch, said the decision was an easy one to make.  “I can remember doing CrossFit exercises when I was in the Academy 14 years ago.  At the time, I had no idea what CrossFit was, so it was years later that I realized why it came so naturally for me,” says Nall.

CrossFit’s methodology fits the needs of our Academy.  You can take any group of people, who fall at any point on the fitness spectrum, and you can figure out a way to implement CrossFit into their lives.  It is all fully “scale-able.”  It also focuses on all ten of the general physical skills of fitness.  CrossFit regimens are known to increase your: Cardio Respiratory Endurance; Strength; Stamina; Flexibility; Power; Speed; Coordination; Accuracy; Agility; and Balance.  The specialty of CrossFit is to not specialize in any of these skills.  Instead, the focus is on all of them with equal importance.

“On any given day, Troopers across the Commonwealth are faced with adversaries of all different levels of fitness.  The skillset of a person who wishes to harm a Trooper is always an unknown factor.  As a result, we have to train cadets to be prepared for anything and everything.  This decision was not about selling a brand, it’s simply about survival,” Nall said.

In addition to a functional style of fitness training, CrossFit also offers a mindset of valor and respect to those who have paid the ultimate sacrifice.  Just as CrossFit gyms across the country honor Lt. Michael Murphy each Memorial Day with the “Memorial Day Murph Hero WOD,” the Kentucky State Police now has 31 specially-designed Hero WODs of its own.  These workouts honor each of the fallen Troopers/Officers of the Kentucky State Police. The rep schemes and time caps on these workouts are significantly aligned with end of watch dates, years of service, and the badge numbers of the fallen hero.

While the Kentucky State Police cannot allow every member of the general public to utilize its training facilities for a personal gym, the website and programming behind this are all completely free.  Anyone is welcome to follow the website, but Captain Nall strongly encourages beginners to seek guidance from informed coaches and trainers: “The website is loaded with information, but there are risks associated with any training regimen, and I wouldn’t want anyone to suffer an injury because they were not forewarned of those potential risks.”

For more information about our CrossFit affiliate, you can go to our website at www.thingraylinecrossfit.com. 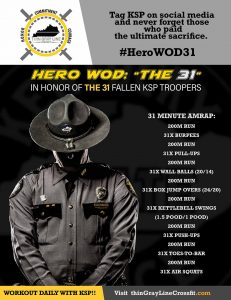