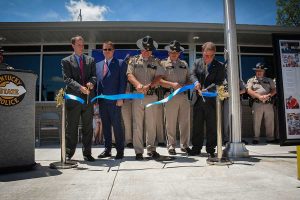 MOREHEAD, Ky. (May 20, 2019) — Kentucky State Police (KSP) Commissioner Rick Sanders announced the re-opening of the Morehead Commercial Vehicle Monitoring Station (commonly called Weigh Station) featuring enhanced technology that will increase highway safety. He was joined by the KSP Commercial Vehicle Enforcement (CVE) Division, Kentucky Transportation Cabinet (KYTC) officials and other guests. After the re-opening the agency unveiled a permanent memorial honoring CVE Inspector Benita Blanton, who was killed in 2016 while on duty, and had worked at the Morehead facility.

Sanders said the renovation to the weigh station was the culmination of a partnership with KYTC that will increase highway safety.

“We are excited to officially re-open this facility today as it is one more tool we will utilize to ensure safety on Kentucky highways,” noted Sanders. “The enhanced redesign allows for a better flow of trucks entering the station and provides our inspectors with advanced technology to make their job easier.”

Sanders praised KYTC for their forward thinking on the technological innovations made at the facility. 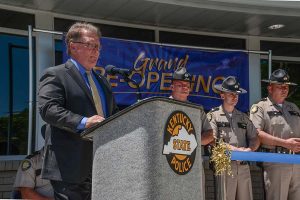 “The improvements to this facility and the impact it will have on highway safety would not have been possible without the guidance and investment that the Kentucky Transportation Cabinet team provided,” added Sanders “Lives will be saved because of their dedication to this project.”

In 2018, KSP’s Commercial Vehicle Enforcement Division inspected 74,940 trucks resulting in 16,969 Out-Of-Service violations, meaningthe vehicle or driver did not meet safety standards resulting in the vehicle being removed from the roadway until the violation was corrected.

This year, during the month of April, KSP Weigh Stations processed over 300 hundred thousand commercial vehicles at weigh stations across Kentucky. The Morehead station accommodated 19,624 of those vehicles.

Kentucky Office of Highway Safety Acting Executive Director Jason Siwula was on hand for the re-opening ceremony and expanded on the technological improvements. 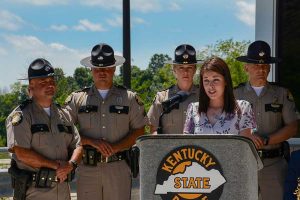 Following the ribbon cutting ceremony that officially opened the weigh station, the agency then unveiled a permanent memorial honoring CVE Inspector Benita Blanton, who worked at the weigh station and was killed in a car crash while on duty in 2016.

A memorial bench with Inspector Blanton’s name engraved on it was presented to the family members and will remain on display at the weigh station for visitors to use. The bench was purchased by the Kentucky State Police Foundation.

Inspector Blanton began her career with KSP in 2012 where she served as a dispatcher at KSP Post 8 in Morehead. In 2016, she transferred to the KSP Commercial Vehicle Enforcement Division as a CVE Inspector until she passed away as a result of injuries she sustained in a car crash in December of 2016. 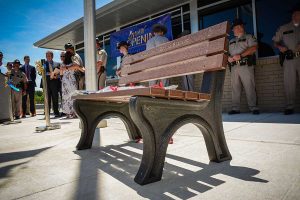 CVE Captain Jamie Collins was her commander and said she would have been happy to see the changes made to the Morehead Weigh Station.

“She was an amazing co-worker, friend and mother and she loved the agency she worked for,” said Collins. “If she were here today, she would be excited to see the improvements to this facility. She was a dedicated employee who truly cared about the job she was tasked with doing.”