FRANKFORT, Ky. (April 11, 2022) – In honor of National Public Safety Telecommunications Week, Gov. Andy Beshear and the Kentucky State Police (KSP) are recognizing dispatchers who answer the call daily to provide assistance and assurance to citizens of the commonwealth.

“Seldom seen by the citizens they serve, telecommunicators perform critical roles in delivering public safety services while calming those who are experiencing their most traumatic moment,” Gov. Beshear said. “Their dedication and service are second to none, and all of us on Team Kentucky want to thank our ‘heroes behind the headsets’ for creating a better and safer commonwealth.”

National Public Safety Telecommunications Week was established in 1981 by Patricia Anderson of the Contra Costa County Sheriff’s Office in California. Each year, the second week of April is set aside to acknowledge those serving as telecommunicators across the country.

In November, the Governor unveiled part of two-year budget plan making historic investments in law enforcement so the commonwealth can be a leader in improving public safety. The Governor’s two-year budget plan provided millions of dollars to fund competitive salaries for KSP telecommunicators, increasing the starting pay from $24,000 annually to $32,000. Currently, KSP telecommunicators are in the bottom 10% of lowest paid in the state. In the past five years, KSP has averaged a nearly 23% turnover rate.

“I appreciate the Governor for doing the right thing and fighting for competitive salaries for our telecommunicators who serve the commonwealth with the utmost integrity, skill and dedication,” Justice and Public Safety Cabinet Secretary Kerry Harvey said. “As the 2022 Regular Legislative Session comes to a close, salary increases for KSP telecommunicators has yet to pass. I call upon my friends in the General Assembly to join us in support of KSP’s telecommunicators who are a vital link in keeping law enforcement officers and Kentuckians safe at all times, day and night.”

“The telecommunicators who serve with KSP are outstanding in their work,” said KSP Commissioner Phillip Burnett, Jr. “They are the first line of assistance to callers in need and remain calm when faced with stressful situations. If you know a telecommunicator, I encourage you to reach out to them and share your appreciation for what they do.”

The agency is currently hiring 39 telecommunicators at local posts across the state. New hires will receive the training and equipment necessary for success, including a four-week paid training academy to be certified by the Kentucky Law Enforcement Council.

The requirements to become a KSP telecommunicator include:

“The people who should consider a career as a Telecommunicator are those with a heart for service above self. This is a calling more than a career,” said KSP Post 1 Telecommunicator Brandon Crews. “Some of the best dispatchers had no previous experience are now touching countless lives.”

The mission of KSP is to promote public safety through service, integrity, and professionalism using partnerships to prevent, reduce and deter crime and the fear of crime, enhance highway safety through education and enforcement, safeguard property and protect individual rights. 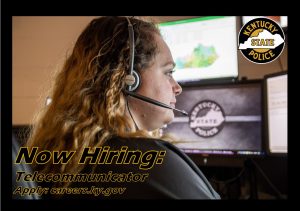