Murray, KY. (March 12, 2021) – Troopers with Kentucky State Police, Post 1 arrested a Paducah man Tuesday morning in Murray after he fled from law enforcement. At approximately 11:50 a.m. on Tuesday, March 9th, Troopers observed a 2005 Chevrolet Tahoe traveling west on KY 94 outside of Murray and attempted to stop the vehicle for a traffic violation. The vehicle sped up and attempted to elude Troopers. The vehicle attempted to turn onto KY 783, but lost control, left the north side of the roadway, and traveled into a ditch. The operator left the vehicle and ran to the backyard of a residence. The operator was later located inside the residence’s garage and taken into custody. The operator, identified as Joseph L. Owen, 36 of Paducah, Kentucky was found to be under the influence of controlled substances. Through further investigation, Owen was found to be operating a stolen Chevrolet Tahoe from Paducah. 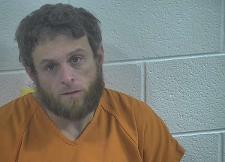