SALEM, Ky. (January 10, 2023) – Kentucky State Police (KSP), Post 1 received a call from a Livingston County resident on December 27, 2022 reporting that his motorcycle had been stolen. The motorcycle was reportedly stolen from the area of Nelms Lane in Salem, KY between November 27 and December 25.

The motorcycle is described as a 2018 black Harley Davidson Road Glide Special. There was damage to the front faring, front forks, and engine of the motorcycle from a previous collision. The motorcycle has black 12″ Lucky Daves T-Bars, a Screamin’ Eagle heavy breather, a black Saddlemen Step-Up seat with red stitching, and Thunderheader exhaust.

Anyone with information about the theft or whereabouts of this motorcycle is asked to contact KSP Post 1 by calling (270)856-3721. The investigation is ongoing by Trooper Bloodworth. 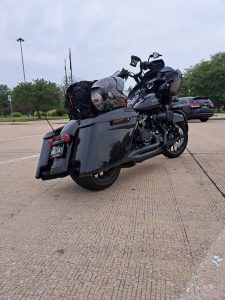