Hickory, KY. (January 26, 2021) – After further investigation, the operator of the 2011 Chevrolet Impala was identified as Eugene W. Hawkins, 78 of Paducah, Kentucky. On Sunday, January 17, 2021, Hawkins was pronounced deceased after the vehicle he was operating pulled in front of a vehicle on US HWY 45 N at the intersection of KY 1241 in Folsomdale. Hawkins’ passenger, Jacqueline A. Robertson, also passed away as a result of injuries sustained in the collision.

The investigation is ongoing by Trooper Aaron Jestes.

Hickory, KY. (January 18, 2021) – Troopers with Kentucky State Police, Post 1 are investigating a Sunday evening collision that claimed the lives of two people and sent one person to jail. Troopers, members of the Post 1 Reconstruction Team, and deputies with the Graves County Sheriff’s Office responded to a two-vehicle collision with injuries near the intersection of KY 1241 and US HWY 45 N. Initial investigation shows a 2011 Chevrolet Impala was traveling north on KY 1241 while a 2002 GMC Envoy, operated by Christina M. Griffin, 42, of Paducah, Kentucky was traveling north on US HWY 45 N. The operator of the Impala attempted to cross the northbound lanes of US HWY 45 N, but failed to yield to Griffin, causing Griffin’s vehicle to collide with the driver’s side of the Impala. After the collision, the Impala continued across the southbound lanes of US HWY 45 N and off the roadway. Griffin’s vehicle rotated in the roadway and came to rest in the median.

Griffin was released into police custody and taken to the Graves County Jail. She was charged with Operating on Suspended or Revoked Operators License, Possession of Marijuana, Drug Paraphernalia-Buy/Possess, and Operating Motor Vehicle Under the Influence of Substance 2nd Offense (Aggravating Circumstances). 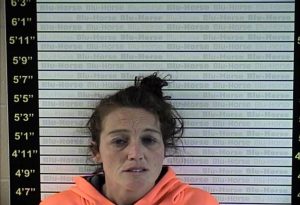