Cadiz, KY. (January 14, 2022) – There have been new developments in the ongoing investigation into the death of an infant that began on October 26, 2021. Detectives with Kentucky State Police (KSP), Post 1 have received the medical examiner’s report that was finalized on December 15, 2021. The medical examiner’s report revealed that the 5 month old infant’s death was due to acute methamphetamine intoxication.
Detectives with KSP Post 1 presented this new information to a Trigg County grand jury seeking an additional charge of Murder in this case. An indictment warrant was issued for Shaylynn Curtis on Friday, January 14, 2022. Detectives have served Curtis with the warrant charging her with Murder and she remains lodged in the Christian County Jail.

Cadiz, KY. (October 27, 2021) – On October 26, 2021 just after 6:00 PM Kentucky State Police, Post 1 was notified by Trigg County Dispatch of an infant that was found deceased in a residence on E. Adams Mill Road in Cadiz. Troopers and detectives with Kentucky State Police, Post 1 responded to investigate the incident at the request of the Trigg County Sheriff’s Office.

The preliminary investigation revealed that 28 year old, Shaylynn Curtis had been residing with her 5 month old baby boy at their residence on E. Adams Mill Road. The infant passed away during the night of October 25, 2021 for reasons still under investigation. Curtis took the deceased infant and drove to a friend’s house. She then returned home, wrapped the infant in a blanket, and placed him in the attic of the residence. Curtis did not make any attempts to call 911 or seek medical assistance for the infant. Friends of Curtis who were concerned about the welfare of the infant contacted 911.

Detectives with Kentucky State Police arrested and charged Shaylynn Curtis with Abuse of a Corpse. She was lodged in the Christian County Jail.

An autopsy was conducted on October 27, 2021. The results of the autopsy are pending and the investigation is continuing by Detective Brian Hill. 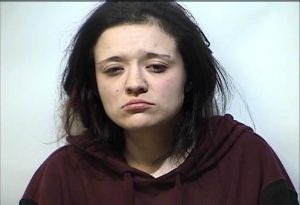