Cadiz, KY. (October 28, 2021) Dequain Mayes has been located and arrested by troopers with Kentucky State Police, Post 1. Mayes was lodged at the Christian County Jail.

The preliminary investigation revealed that two individuals entered a residence on Woodland Drive, demanded money and marijuana, and pointed the weapons at two people. The suspects were identified as 18 year old Noah Beaudry of Cadiz, KY and 19 year old Dequain Mayes of Hopkinsville, KY.

There is an active warrant for the arrest of Mayes. He is wanted for charges of Robbery 1st Degree, Burglary 1st Degree, and Theft by Unlawful Taking. Anyone with information regarding the whereabouts of Mayes is asked to contact Kentucky State Police, Post 1 at 270-856-3721 or anonymously at 1-800-222-5555.  Citizens may also report tips anonymously through the KSP app.  The app is available for iPhone, iPad and Android applications and can be easily downloaded free of charge through Apple and Google Play stores..

The investigation is ongoing by Trooper William Propes. 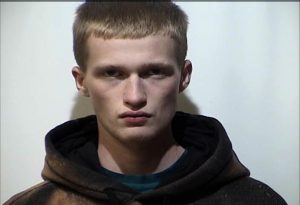