Ledbetter, KY. (February 26, 2022) – While on patrol in Livingston County on February 26, 2022 at approximately 9:40 a.m. CST, a Kentucky State Police (KSP), Post 1 Trooper observed a black Ford Ranger pulling a trailer traveling east on US 60 toward the community of Ledbetter. The Georgia registration plate on the Ford Ranger was found to be reported lost or stolen. The Trooper then observed the vehicle turn around in a driveway and begin traveling west. When the Trooper activated his emergency equipment to attempt to conduct a traffic stop on the vehicle, the Ford Ranger accelerated and continued west before coming to a stop.

Upon stopping, the operator of the Ford Ranger got out and began fleeing from the Trooper on foot. The foot pursuit proceeded through residential yards as the Trooper gave chase and verbal commands for the suspect to stop. The Trooper utilized his Conducted Electrical Weapon to subdue the suspect and take him into custody.

The suspect was identified as Zachary T. Perryman, 27 years old of Hardeeville, SC. It was also determined that the truck and trailer he was driving were both reported stolen in Georgia and the registration plate displayed on the truck did not belong to the truck. Suspected methamphetamine and paraphernalia were located in the truck.

Perryman was arrested and charged by KSP with Receiving Stolen Property Over $1,000, Possession of a Controlled Substance 1st Degree (Methamphetamine), Fleeing or Evading Police 2nd Degree (Motor Vehicle), Fleeing or Evading Police 2nd Degree (On Foot), Possession of Drug Paraphernalia, Operating on a Suspended or Revoked License, Failure to Maintain Insurance, Display of Illegal/Altered Registration Plate, and Resisting Arrest. Perryman was lodged at the McCracken County Jail. The investigation is ongoing by Trooper Propes. 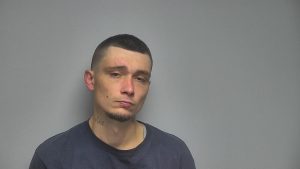