Benton, KY. (March 16, 2022) – Troopers with Kentucky State Police (KSP), Post 1 are currently searching for a Marshall County inmate who escaped the detention facility. Gregory S. Sullivan, described as a 38 year old white male, approximately 5′ 5″ tall and weighing approximately 158 pounds with green eyes and brown hair, was last seen at the Marshall County Detention Center at approximately 11:00 p.m. CST on March 15, 2022. Sullivan was last seen wearing a dark colored shirt, grey/black sweat pants, and tennis shoes. Sullivan has tattoos on his left shoulder of a knife and the word “KAOS” on his left forearm. Sullivan’s method of departure from the detention facility and direction of travel are unknown at this time.

Sullivan was incarcerated at the Marshall County Detention Center for the offenses of receiving stolen property and possession of a controlled substance, 1st degree.

The investigation is being conducted by Trooper Derek Scott. Anyone with information regarding the whereabouts of Sullivan is asked to contact Kentucky State Police, Post 1 at 270-856-3721 or anonymously at 1-800-222-5555.  Citizens may also report tips anonymously through the KSP app.  The app is available for iPhone, iPad and Android applications and can be easily downloaded free of charge through Apple and Google Play stores. 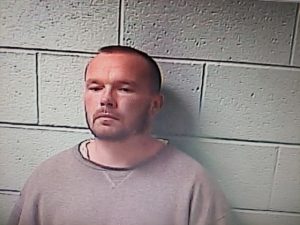