“Highway safety is a shared responsibility, and we work with the motoring public as well as our local, state and federal partners to help provide a safe and reliable transportation system in Kentucky,” said Gov. Andy Beshear, “This award recognizes the men and women of law enforcement, who are a key component in our highway safety efforts. Were it not for their actions, there would undoubtedly be more crashes, injuries or worse on our roadways.”

Awards were presented by the Kentucky Transportation Cabinet’s (KYTC) Office of Highway Safety to more than 200 officers for their enforcement efforts from Oct. 1, 2019 through Sept. 30, 2020.

“This is more than just receiving an award,” said KYTC Secretary Jim Gray. “It is about saving lives and that is what officers do every time they arrest an impaired driver.”

Trooper Stewart arrested 49 impaired drivers on Kentucky roadways. He has been a Trooper with KSP for two years and before that, he served as an officer with the Kennett Police Department in Missouri for four years.

Post 1 Captain David Archer is pleased with Trooper Stewart’s efforts. “Trooper Stewart’s resolve in removing impaired drivers from our roadways has prevented an untold number of deaths and injuries from motor vehicle collisions. His work embodies our mission statement of enhancing highway safety through education and enforcement. He and his fellow troopers work daily to keep our highways safe.”

The Governor’s Impaired Driving Enforcement Awards ceremony, typically held in-person each December, was cancelled due to COVID-19. This year, awards were mailed to each winner. 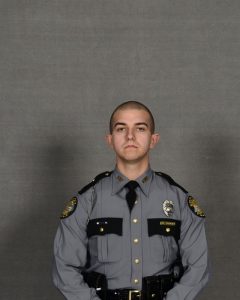