Grand Rivers, KY. (May 13, 2021) – One of multiple suspects involved in the burglary of a residence on Tom Doom Road in Grand Rivers on April 25th, 2021 has been apprehended in Tennessee. On Tuesday, May 11th, deputies with the Obion County Sheriff’s Office arrested Zachery D. Winters, 35 of Union City, Tennessee for Driving on Revoked/Suspended License and Warrant of Arrest for Crime in Other State. Winters was lodged in the Obion County Detention Center and is awaiting extradition back to Kentucky on charges of Burglary, 1st Degree.

Troopers with Kentucky State Police, Post 1 are still attempting to identify the other male suspect involved in the burglary. If anyone as any information that could lead to the identification of the other male and/or the vehicle, please contact Post 1 at 270-856-3721. The investigation is ongoing by Trooper Derral Redwine. 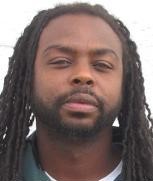 Grand Rivers, KY. (May 3, 2021) – Troopers with Kentucky State Police, Post 1 are investigating a burglary that occurred at a residence in Grand Rivers. The burglary reportedly occurred on the morning of Sunday, April 25th, 2021 at a residence in the 100 block of Tom Doom Road. According to video surveillance footage, two black males came on the residential property around 10:36 a.m. and left the property around 10:56 a.m. Video surveillance also shows a black, 4-door, passenger sedan in the immediate area at the time of the burglary. The unknown suspects reportedly stole over $10,000 of collectable coins, bills, and a set of knives from the residence.

Kentucky State Police, Post 1 is requesting the public’s assistance in identifying the two unknown suspects and/or the suspicious vehicle. If anyone has any information that could lead to the identification of these two males and/or the vehicle, please contact Post 1 at 270-856-3721. The investigation is ongoing by Trooper Derral Redwine. 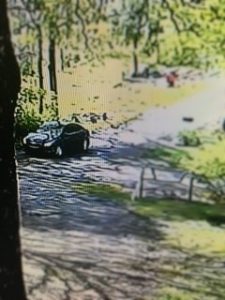 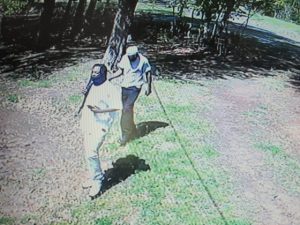