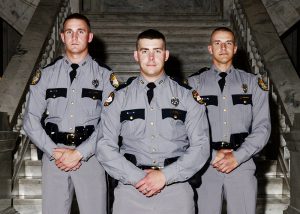 Trooper Holt received the Commissioner’s Commitment to Excellence Award, which is presented to cadets who demonstrate leadership, the desire to get the job done and the determination to be the best every day.

Trooper Cornwell was one of nine cadets who earned Associate’s Degrees in General Occupational and Technical Studies from the Bluegrass Community and Technical College during the training.

The new troopers will spend eight weeks with a supervised field training officer before working their assigned county. Two troopers will be assigned to Post 1’s western squad, which includes the counties of Fulton, Hickman, Carlisle, Ballard, and Graves.  One trooper will be assigned to the eastern squad which includes the counties of Livingston, Lyon, and Trigg.

KSP is now accepting applications for a cadet class tentatively scheduled to begin in April of 2019. For more information, visit the Kentucky State Police Recruitment website at http://kentuckystatepolice.org/recruitment/ . Applicants may also call the Recruitment office toll-free at 1-866-360-3165 during office hours from 8 a.m. to 4:30 p.m. (ET) Monday through Friday or leave a message any other time.

All application materials must be completed and returned to the Kentucky State Police Recruitment Branch by Thursday, August 23, 2018.