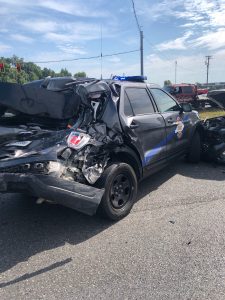 Hickory, KY (August 31st, 2019)- The Kentucky State Police responded to an injury collision at KY 408 and US45N (southbound), at approximately 10:12 A.M. Initial investigation reveals that the original accident occurred due to inattention which caused a driver to run a red light. Minor injuries only, were reported during that collision. Several Troopers responded to the scene of the original collision. Troopers blocked off one lane of US45N (southbound traffic), to shield emergency personnel and victims of the collision.   A motor home operated by Stephen Steinert of Elkhart Lake, WI was south on US45N.  The motor home struck a Kentucky State Police marked Ford Explorer with blue lights activated.  The State Police vehicle was unoccupied and received extensive damage. No injuries were reported in the second collision.  Both these collisions were caused by inattention.  The Kentucky State Police asks motorists to pay attention while traveling during the busy holiday weekend. The law in Kentucky directs motorists to move over for emergency vehicles.

The investigation continues by Sgt. Eric Fields. KSP was assisted on scene by Mayfield Fire/ EMS, Cecil’s Towing and Affordable Towing.  Anyone with information is asked to contact the Kentucky State Police Post 1 at 270-856-3721 or anonymously at 1-800-222-5555.  Citizens may also report tips anonymously through the KSP app.  The app is available for iPhone, iPad and Android applications and can be easily downloaded free of charge through Apple and Google Play stores.