Louisville, KY. (September 14, 2021) – On Thursday, September 9th, the Kentucky Emergency Services Conference held its annual awards banquet in Louisville to honor emergency service personnel from across the Commonwealth of Kentucky.  The Kentucky State Police, Post 1 communications center was recognized as the 2021 “PSAP of the Year”.  PSAP or Public Safety Answering Point is more commonly known as a 911 communications center.  The 911 center at Post 1 in Hickory serves as the PSAP for agencies in Ballard, Graves, Hickman, and Lyon Counties.  Aside from dispatching for the Kentucky State Police, Post 1 is the primary dispatch center for all emergency services in Graves and Lyon Counties including their municipal departments.  In 2020 the 911 center in Hickory answered nearly 26,000 9-1-1 calls and 75,000 non-emergency calls in addition to delivering and receiving hundreds of thousands of radio transmissions.

“Like everyone else around the world, COVID-19 played a dramatic role in the lives of our staff.  What sets these folks apart from many is the fact that they had no option for remote working and the center can never close.  Our communications staff never wavered and put public service ahead of everything to ensure they completed their mission” states Lieutenant Dean Patterson who serves as the sworn supervisor for the communication center.

When it appeared that resources were stretched to their limit, the Christmas Day bombings in Nashville, TN, knocked out telecommunication services to a large portion of the southeast including most parts of Kentucky.

“The day that AT&T services were disrupted on Christmas, our communication center became the redundancy for countless other dispatch centers and emergency services.  Much of our staff left their families at Christmas to ensure that the communications center was adequately staffed to take on the extra call volume.  There have only been a few times when I have seen that type of selflessness in a group of people” Patterson remarked. 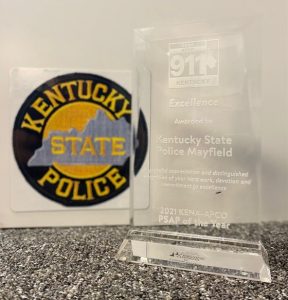