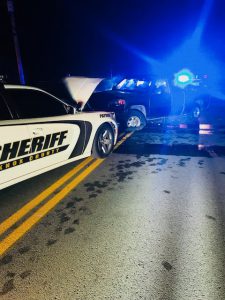 Artemus, Ky. (August 29, 2018) On August 28, 2018 at approximately 10:00 p.m. a Knox County Deputy located a vehicle that matched a possible stolen vehicle and had expired registration plates from 2016. The Deputy attempted to initiate a traffic stop by turning on his emergency equipment on south Ky 11 in the Swan pond area of Knox County. The operator of 1999 gold GMC Sierra failed to stop and continued traveling into the Davis Bend area and then turning onto Little Brush Creek. While officers pursued the vehicle through Little Brush Creek, a Barbourville Police Officer throw out a tire deflation device striking the pickup causing all four tires to lose air. The operator continued out of Little Brush Creek onto Ky 225 north bound toward Barbourville when it stuck a Knox County Deputy head on at the entrance of Coal Port Road. The Deputy fired his service weapon into the pickup after being stuck head on and the operator fled from the scene leading deputies into an open field before being apprehended after a physical altercation.

The Operator was taken to Knox County ARH Hospital for injuries from the collision. The operator and the passenger were not struck from the discharge of the firearm. The passenger refused treatment at the scene and taken into custody.

Two officers were treated at the scene for minor injuries. Knox County Sheriff’s Deputies were assisted in the pursuit by Barbourville Police Officers. Sgt. Jason Bunch with Kentucky State Police is continuing the investigation.

Charges are pending on both individuals involved. 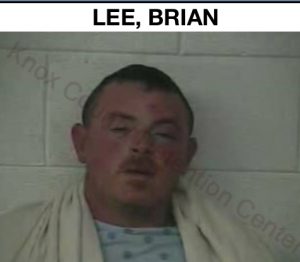 The operator of the pickup, Brian Lee (32) of Barbourville was released from the Knox County ARH Hospital at approximately 4:00 a.m. Wednesday morning. Deputy Brian Lawson with Knox County Sheriff’s Department charged Mr. Lee with the following charges and lodged him into the Knox County Detention Center.

The passenger inside of the vehicle was not charged. Sgt. Jason Bunch with KSP is continuing the Wanton Endangerment 1st investigation against Mr. Lee and will present the case to the Knox County Grand Jury. KSP will continue to release more information as it comes available.