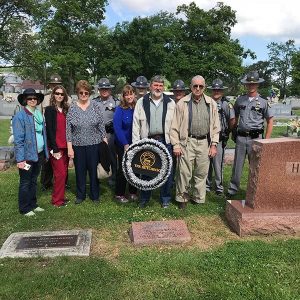 (LONDON, KY.) – On Tuesday, May 14, 2019, at 10:30 AM, KSP Post 11 personnel placed a wreath at the grave of Trooper John Wayne Hutchinson, at the Elk Springs Cemetery in Wayne County as part of the Kentucky State Police’s annual observance of National Police Officer’s Memorial Week.

Trooper John Wayne Hutchinson, age 29, was fatally shot June 4, 1975, while making an arrest of a drunk driver in McCreary County. Trooper Hutchinson was assigned to Post 11 London and had served with the Kentucky State Police for two years. He is buried at Elk Springs in Wayne County, Ky. In honor of his service and sacrifice, KY 90 in Wayne County has been designated the Trooper John W. Hutchinson Memorial Highway.