Trooper Hensley is continuing the investigation. 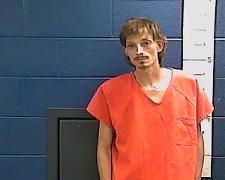 London, Ky. (June 28, 2019) – On Friday, June 28, 2019 at approximately 1:17 PM, Kentucky State Police Post 11, London was notified that a Rockcastle County Jail inmate had escaped custody while working on a work release detail on KY HWY 1955 in the Red Hill community of Rockcastle County.

Upon arrival, Trooper Adam Hensley learned through an investigation that inmate Joseph D. Morris, 30, of Livingston, fled on foot from a Rockcastle County employee while mowing grass on Daughtery Ridge Road.

An immediate broadcast was made and numerous police units responded to the scene and established a perimeter. Morris has not been located as of yet. He was last seen wearing brown khaki pants with an orange shirt. He is described as being male white with brown hair, 5’06 tall and weighs approximately 105 pounds.

Trooper Hensley is continuing the investigation.