London, KY. (July 26, 2021) – On July 22, 202, Executive Cabinet Secretary J. Michael Brown joined Kentucky State Police (KSP) Commissioner Phillip Burnett, Jr. to recognize 58 KSP troopers and officers for their professionalism and dedication to duty at a ceremony in Lexington. Due to the coronavirus pandemic, the award ceremony, originally scheduled to take place in 2020, but was postponed. The achievement awards presented at the ceremony were for acts of service that occurred 2019.

Post 11 troopers were included in those honors. Trooper Matthew K. Parmley was named Post 11 Trooper of the Year. A 4-year veteran of the Kentucky State Police, he is currently assigned to Post 11 London. Trooper Parmley was assigned to Wayne County but is now a Detective at Post 11.

Detective James E. Moore was named Post 11 Detective of the Year. An 11-year veteran of the Kentucky State Police, he is currently assigned to Post 11 London. Det. Moore is still a Detective at Post 11 London.

Trooper Harrison Wells IV received a Lifesaving Medal, which is awarded to officers who perform life-saving acts under extraordinary circumstances. A 6-year veteran of the Kentucky State Police, he is currently assigned to Post 11 London. Tpr. Wells is still working in McCreary County.

Post Commander Scott Felder said he is proud of the commitment and efforts of these units.

“These men exemplify the integrity, dedication, and professionalism that are hallmarks of this agency.” 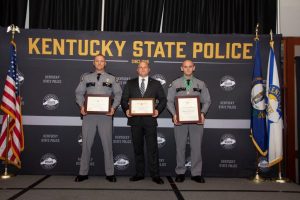