2020 Civilian of the Year Announced

FRANKFORT, Ky. (Oct. 21, 2021) – Today, Kentucky State Police (KSP) held its annual civilian awards ceremony in Frankfort to honor 14 civilian employees who have excelled in public service and dedication to the agency. The achievement awards presented were for accomplishments that occurred during 2020.

“All of you serve as a significant asset to the mission of the Kentucky State Police, building trust within our communities and addressing the public safety needs of the commonwealth,” said Gov. Andy Beshear. “We are a safer Kentucky because of you, and we thank you.”

On behalf of the Beshear-Coleman administration, Justice and Public Safety Cabinet Secretary Kerry Harvey attended the ceremony to personally congratulate the award recipients and thank them for their dedication to serving the commonwealth.

“All of you are essential front-line workers who are faced with unique challenges daily and work to keep both our state troopers and Kentuckians safe at all times,” said Secretary Harvey. “Thank you for serving the commonwealth with the utmost integrity, skill and dedication.”

The mission of KSP is to promote public safety through service, integrity and professionalism using partnerships to prevent, reduce and deter crime and the fear of crime; enhance highway safety through education and enforcement; and safeguard property and protect individual rights. During the ceremony, KSP Commissioner Phillip Burnett Jr. said civilian employees are critical to the agency’s success, and it’s important to recognize their dedication.

During the ceremony, Commissioner Burnett and Secretary Harvey presented Henderson County resident Jerri Walters with the 2020 ‘KSP Civilian of the Year’ Award. Walters serves as an administrative specialist III at Post 16 in Henderson and is a 30-year veteran of the agency.

Walter’s peers noted that they nominated her due to her professionalism and interpersonal skills, making her a well-respected leader. They stated that Walters has been instrumental in acclimating new post commanders and troopers to post operations for three decades. In addition to her regular job duties, she enjoys assisting with post-level events, including Trooper Island Camp fundraisers and the annual Cram the Cruiser food drive. 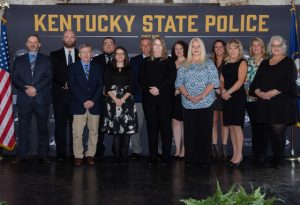