Celebrate raising more than $20,000 during ‘Cover the Cruiser’ fundraiser

Lt. Gov. Coleman said the proclamation is a way for Kentucky to show support for the athletes participating in this year’s annual summer games scheduled to begin June 5 in Richmond, which is designed to build confidence and showcase the tremendous abilities people with intellectual disabilities possess.

“Special Olympics Kentucky is a very important organization and I am proud to present this proclamation on behalf of Gov. Beshear,” said Lt. Gov. Coleman. “These athletes model what inclusion for all should look like and I want to wish all participants the best of luck as they return to compete in the State Summer Games after taking a year off as the nation fought against a global pandemic.”

The proclamation comes on the heels of a recent fundraising event hosted by KSP called ‘Cover the Cruiser.’ This event allowed citizens to purchase stickers for a $1 donation and place them on KSP cruisers parked at a variety of public locations throughout the state during a week in mid-May.

“Our agency has had a long-standing partnership with Special Olympics Kentucky,” said Commissioner Burnett. “I’m very proud of our troopers for their dedication to this project and to the many Kentuckians who helped raised funds to transform an athlete’s life.”

During the event, Commissioner Burnett presented Special Olympics Kentucky with a check in the amount of $20,103.32 for the funds raised from ‘Cover the Cruiser’. This year’s fundraising amount is an increase of nearly four thousand dollars over last year.

Special Olympics is the world’s largest program of sports training and competition for children and adults with intellectual disabilities. The organization has been serving the needs of our athletes and their families since 1970 and welcomes 11,300 athletes in Kentucky.

For more information about the ‘Cover the Cruiser’ campaign or to make a tax deductible donation visit, http://soky.org/coverthecruiser/. 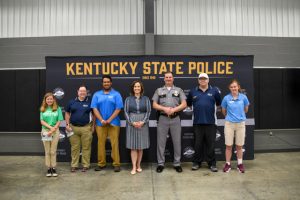 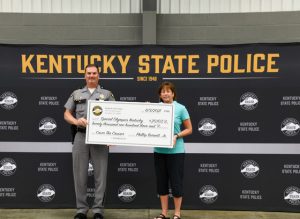 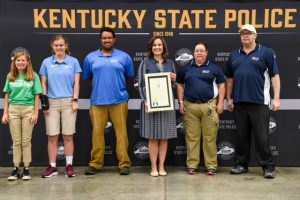