Trooper Joseph Hensley is assigned to the Daviess and Hancock County squad. Trooper Hensley is well respected within his district and has been a consistent top performer while answering a variety of service calls. Hensley was presented with Post 16’s Trooper of the Year award.

Detective Adam Wright investigated and cleared a multitude of high profile criminal cases including sexual abuse and rape complaints. Detective Wright is well respected in his community of Ohio County and surrounding counties. He was presented with Post 16’s Detective of the Year award.

On January 01, 2019, Trooper Shaun Schroader responded to a burglary in progress with the Ohio County Sheriff’s Department. The caller informed Ohio County Dispatch that an unknown suspect had gained entry into the residence. Trooper Schroader was the first unit on scene and observed a glass door on the front of the residence had been shattered. Also, he heard a female screaming from within the residence. As Trooper Schroader entered the residence, he observed two females in the living room and a male subject lying on the living room floor next to his wheelchair. Trooper Schroader checked the man’s vitals and observed he had no pulse. Trooper Schroader quickly notified Post he was initiating CPR and requested EMS. Trooper Schroader continued to give chest compressions until Trooper Eric Browning and Deputy Andy Vincent arrived on scene. Trooper Browning and Deputy Vincent provided relief for Trooper Schroader and all three units continued to administer CPR until EMS arrived. Once EMS arrived on scene, the man had a pulse and had to be intubated with assisted ventilations. CPR was administered for approximately thirteen minutes before EMS arrived at the scene. The gentleman, who was transported to Owensboro Hospital, made a full recovery and was released from the hospital at a later date.

Lexington, KY. (July 22, 2021) – Today, Kentucky State Police (KSP) held the annual achievement awards ceremony in Lexington to honor 62 troopers and officers who put on a uniform each day to patrol Kentucky’s neighborhoods with a mission of serving and protecting their fellow citizens. Due to the coronavirus pandemic, last year’s ceremony was postponed until it was safe to hold an in-person event in accordance with Healthy at Work and CDC guidelines. The achievement awards presented were for acts of service that occurred during 2019.

On behalf of Gov. Andy Beshear, Secretary of the Executive Cabinet J. Michael Brown attended the event to thank the award recipients for their valiant service to the commonwealth and protection of all Kentuckians.

“The COVID-19 pandemic may have delayed this recognition but nothing can diminish the achievement, dedication and bravery of those we honor this evening,” said Secretary Brown.  “I am honored to be able to personally congratulate the award recipients.”

KSP Commissioner Phillip Burnett, Jr. also spoke during the ceremony praising the agency’s personnel for going above the call of duty and placing service above self.

“Tonight we honor troopers and officers who have went above the call,” said Burnett. “From lifesaving rescues to acts of bravery during critical incidents, your efforts have impacted lives of the citizens you serve.”

The 2019 award recipients include:

Trooper Jerry A. Baker Jr. was named 2019 Trooper of the Year. Trooper Baker is a 3-year veteran of KSP assigned to KSP Post 13 in Hazard.

Detective Michael R. Robichaud was named 2019 Detective of the Year. Detective Robichaud is a 10-year veteran of KSP assigned to the KSP Post 1 in Mayfield.

Trooper Shane Jacobs was named 2019 Public Affairs Officer of the Year. Trooper Jacobs is a 19-year veteran of KSP assigned to KSP Post 10 in Harlan.

Detective Terry A. Scott was named 2019 Arson Investigator of the Year. Detective Scott is a 19-year veteran of KSP assigned to the Special Operations Branch.

Officer Rick D. Kuiper was named 2019 Facilities Security Officer of the Year. Officer Kuiper is a 8-year veteran of KSP assigned to the Security Branch.

Seven troopers were awarded the KSP Citation for Bravery, an honor bestowed on officers of the agency who perform acts of bravery, without regard for personal risk despite clear and obvious peril, and clearly above and beyond the call or risk of ordinary duty.

Five troopers received the Lifesaving Medal, which is awarded to officers who perform life-saving acts under extraordinary circumstances.

Three troopers received the Guthrie Crowe Award, which is named in honor of the first commissioner of KSP and bestowed upon officers of the agency who sustain a severe wound or injury during the performance of their law enforcement duty.

Eighteen troopers were named Detective of the Year at the post, branch or division level.

Twenty troopers were named Trooper of the Year at the post, branch or division level.

Three Commercial Vehicle Enforcement officers were named Officer of the Year at the regional level.

The mission of KSP is to promote public safety through service, integrity and professionalism using partnerships to prevent, reduce and deter crime and the fear of crime, enhance highway safety through education and enforcement, and safeguard property and protect individual rights.

KSP’s focus this year is to maintain and strengthen its essential workforce in order to better provide public safety, maintain critical services and better reflect the diverse communities that KSP serves. The agency has expanded their recruitment department with the addition of one female trooper, one male trooper and the hiring of three new minority troopers. KSP is also partnering with Dr. Aaron Thompson of the Kentucky Council on Postsecondary Education, Vickie Stone of the Kentucky Personnel Cabinet, and working closely with retired minority KSP Troopers, to further improve their diversity recruitment efforts. 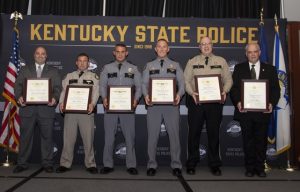