FRANKFORT, Ky. (September 21, 2022) –  The Kentucky State Police (KSP) announced that Captain Todd Kidd graduated as a member of the 283rd session of the FBI National Academy. The graduation occurred at the National Academy in Quantico, Virginia, on September 13, 2022.

Internationally known for its academic excellence, the National Academy offers ten weeks of advanced communication, leadership, and fitness training. Participants must have proven records as professionals within their agencies to attend. On average, these officers have 21 years of law enforcement experience and usually return to their agencies to serve in executive-level positions.

The 283rd session consisted of 235 law enforcement officers from 49 states and the District of Columbia. The class included members of law enforcement agencies from 21 countries, five military organizations, and five federal and civilian agencies.

KSP Commissioner Phillip Burnett said he was proud of Kidd’s graduation as only 1% of the nation’s law enforcement officers are nominated to attend the FBI National Academy.

“The training Captain Kidd received over the past ten weeks will be invaluable to him and our agency,” said Commissioner Burnett. “I commend his efforts to prepare for the physical and mental challenges this academy requires and look forward to seeing the impact his experience will have on his career.”

Captain Kidd is a 24-year veteran of KSP and has served in numerous assignments, including squad sergeant, operations lieutenant, and investigative lieutenant. He has previously served as post commander at Post 9, Pikeville, and Post 16, Henderson. He is the current commander of Post 12, Frankfort.

Captain Kidd is a native of Pike County. He earned a Bachelor of Science from the University of Louisville. He also holds a master’s degree in criminal justice from the University of the Cumberlands and is a graduate of the Southern Police Institute’s Administrative Officer Course. Since serving with KSP, he has received multiple awards, including the Commissioner’s Commendation and the Governor’s Award for Impaired Driving Enforcement. He currently resides in Lexington.

The number one priority for KSP is creating a better Kentucky by making the commonwealth’s streets safer, communities stronger and the nation more secure by providing exceptional law enforcement made up of a diverse workforce. For more information about career opportunities with KSP, visit their website.

About the FBI National Academy

FBI Academy instructors, special agents, and other staff with advanced degrees provide the training; many instructors are recognized internationally in their fields. Since 1972, National Academy students have been able to earn undergraduate and graduate credits from the University of Virginia, which accredits many of the courses offered. A total of 53,671 graduates have completed the FBI National Academy since it began in 1935. The National Academy is held at the FBI Training Academy in Quantico, the same facility where the FBI trains its new special agents and intelligence analysts. 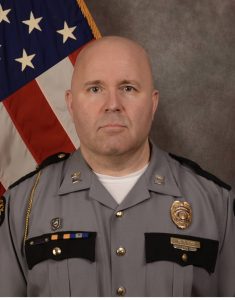