FRANKFORT, Ky. (Sept. 9, 2022) – Yesterday, The Kentucky State Police (KSP) held its annual sworn awards ceremony in Lexington to honor 75 troopers and officers who put on a uniform each day to patrol Kentucky’s neighborhoods with a mission of serving and protecting their fellow citizens. The achievement awards presented were for acts of bravery and service that occurred in 2021.

Six troopers and officers from the Post 12 area were included in those honors.

Senior Trooper Brandon Boggs was named 2021 Post 12 Trooper of the Year and received the KSP Lifesaving Medal. Trooper Boggs is a 3-year veteran of KSP assigned to Post 12 Frankfort.

Detective Justin Hunter was named 2021 Post 12 Detective of the Year. Detective Hunter is an 8-year veteran of KSP assigned to Post 12 Frankfort.

Trooper Charles Wagner was named 2021 Academy Branch Trooper of the Year. Trooper Wagner is a 9-year veteran of KSP assigned to the Academy Branch (Frankfort).

Post 12 Commander Todd Kidd said he is proud of the commitment and efforts of these units.

“Congratulations to all of the troopers and officers in our Post region for earning these much-deserved awards,” said Captain Kidd. “It is an honor to serve alongside them.” 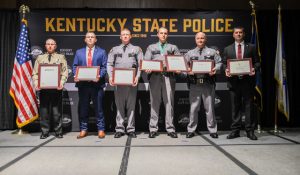