LEXINGTON, Ky. (Sept. 9, 2022) – Yesterday, Kentucky State Police (KSP) held its annual sworn awards ceremony in Lexington to honor 75 troopers and officers who put on a uniform each day to patrol Kentucky’s neighborhoods with a mission of serving and protecting their fellow citizens. The achievement awards presented were for acts of bravery and service that occurred in 2021.

“The past year has challenged us in many ways with the Western Kentucky tornadoes and Eastern Kentucky flooding,” Gov. Andy Beshear said. “Through it all, our heroes in uniform have shown up to answer the call for help, no matter the request. Thank you to our troopers and officers for their steadfast service, loyalty, bravery and commitment to creating safer communities. The commonwealth owes all of you a huge debt of gratitude.”

On behalf of the Beshear-Coleman administration, Justice and Public Safety Cabinet Secretary Kerry Harvey attended the ceremony to thank award recipients for their valiant service to the commonwealth and protection of all Kentuckians.

“For every moment of harm prevented, assurance given, and guidance offered to our citizens, thank you. It is because of every member of KSP that the Commonwealth of Kentucky is better and safer for our kids, families and future generations,” said Secretary Harvey.

During the ceremony, KSP Commissioner Phillip Burnett Jr. recognized the agency’s troopers and officers for going beyond the mission of KSP in 2021 to protect and serve the citizens of the commonwealth by responding to the western Kentucky tornadoes, running into unthinkable dangers, assisting with the continued fight against the deadly drug epidemic and answering thousands of calls for service.

“Your dedication and commitment to service is unmatched,” said Commissioner Burnett. “Each of you put your lives on the line every day. The heroism you have put forth is why you are the best of the best and our agency is indebted to you.”

The 2021 award recipients include:

A complete listing of award recipients can be found on the KSP website.

The Beshear-Coleman administration’s top priority is the safety of all Kentuckians. The public safety actions already taken by the Governor are creating safer communities and a better Kentucky now and into the future.

Since taking office, Gov. Beshear has awarded almost $8 million in grant funding to assist state and local law enforcement agencies to purchase the tools and resources that will not only allow them to protect our communities but will also ensure their own safety as they stand on the front lines every day.

In April, the Governor signed into law two pieces of legislation recently passed by the General Assembly to make historic investments in law enforcement by providing funds to KSP to recruit, train and retain the essential workforce needed to continue to provide the highest level of security to all Kentuckians. House Bill 259 ensures that all troopers will receive a $15,000 raise. Additionally, KSP’s starting pay for sworn officers will increase from $37,887 to $55,888 annually. By signing Senate Bill 209, Gov. Beshear established paid vacation, sick leave and holiday pay, as well as enhanced health insurance contribution payments for retired KSP troopers and CVE officers.

Also, as the Governor recommended in January 2022, $12.2 million was included in the state budget for KSP to purchase body cameras, which is the first time in the commonwealth’s history that funding has been allocated for this much-needed expense.

Gov. Beshear has championed legislative action like Senate Bill 64 and House Bill 254, making it easier for law enforcement to conduct undercover stings and increase the chances of stopping a horrific crime against a child from being facilitated through the internet. These actions will also provide law enforcement officers with the authority to charge offenders with harsher crimes to keep them away from the public, preventing further interactions with Kentucky’s most vulnerable population. 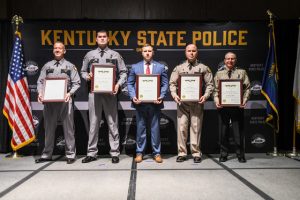