Hazard, KY. (July 26, 2021) – On Thursday, July 22, 2021, Executive Cabinet Secretary J. Michael Brown joined Kentucky State Police (KSP) Commissioner Phillip Burnett, Jr. to recognize 58 KSP troopers and officers for their professionalism and dedication to duty at a ceremony in Lexington. Due to the coronavirus pandemic, the award ceremony, originally scheduled to take place in 2020, was postponed. The achievement awards presented at the ceremony were for acts of service that occurred 2019.

Trooper Jerry A. Baker Jr. was named the Post 13 Trooper of the Year. He also received the distinction of being named the KSP Trooper of the Year out of 19 other nominations from across the state. A 3-year veteran of the Kentucky State Police, he is currently assigned to Post 13 Hazard, and works Perry County.

Detective Joshua T. Huff was named Post 13 Detective of the Year. An 8-year veteran of the Kentucky State Police, he is currently assigned to Post 13 Hazard.

Trooper Micheal J. Caudill received the Meritorious Service Award for his efforts in coordinating fundraising to supply needy families throughout the Post 13 area with Thanksgiving dinners. Trooper Caudill has overseen this project since it began in 2016.

Post Commander Jennifer Sandlin said she is proud of the outstanding work ethic of these troopers and their commitment to serving their communities. 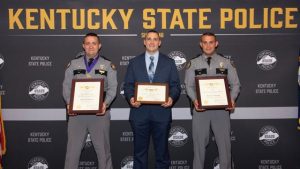