LEBANON,KY (July 26, 2022) – The arrest warrant for Assault 1st Degree on Edwin Riley has been served. Riley has been arrested and lodged in the Shelby County Detention Center. Chrissy Rogers has also been located.

LEBANON, KY (July 26, 2022) – The Kentucky State Police continues the investigation this incident. An arrest warrant has been issued for Edwin Riley for Assault 1st Degree. At this time, the arrest warrant for Riley is still outstanding. A photograph of Riley has been attached. 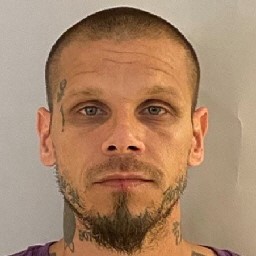 On Friday morning, July 22, 2022 at approximately 10:18 A.M. EST, KSP troopers responded to KY 337 and learned that one male had been shot. The preliminary investigation revealed that Edwin Riley, age 45 of Harrodsburg, had discharged a firearm, striking the male victim.  The male victim was hospitalized with life-threatening injuries.

As a result of the preliminary investigation, an arrest warrant was issued for Riley for Assault 1st Degree.  At this time, the arrest warrant for Riley is still outstanding.  Riley is also believed to be in the company of Chrissy Rogers, age 31 of Lebanon.  Rogers is also being sought by KSP for questioning in regards to the incident.

The case remains under investigation by Detective Zach Scott.  Det. Scott was assisted by other KSP Troopers and the Marion County Sheriff’s Office.  Anyone with information regarding this investigation or the whereabouts of either Edwin Riley or Chrissy Rogers are urged to call the Kentucky State Police Post 15 at either 270-384-4796 or 1-800-222-5555 or by using the KSP application on an electronic device.