Eddyville, KY. (April 18, 2021) – Kentucky State Police arrested a Missouri woman after she led Troopers and other law enforcement on a pursuit through four Western Kentucky counties. Around 8:45 a.m. Saturday morning, a 2017 BMW utility vehicle passed a Trooper traveling eastbound on Interstate 24 near the 52 mile marker at a high rate of speed. The Trooper pursued the vehicle on Interstate 24 through Lyon, Caldwell, Trigg County before entering Christian County in the Post 2 district. Troopers with Post 2, Madisonville successfully deployed a tire deflation device at the 83 mile marker, slowing down the vehicle. The vehicle continued to flee however and another deflation device was deployed by Christian County Sheriff’s deputies near the 84 mile marker. The vehicle pulled over shortly after. The operator of the vehicle, Kathleen R. Kummant, 57 of St. Louis, Missouri was taken into custody without further incident.

The investigation is being conducted by Trooper Aaron Jestes. 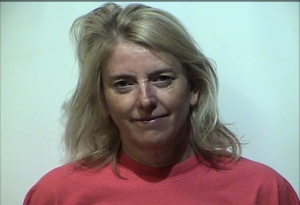