Clifty, KY, (Todd County) – On May 14, 2022, David Slagle was arrested and lodged in the Logan County Detention Center.

Clifty, KY, (Todd County) – On Friday,  May 13, 2022, at approximately 9:05 A.M. the Kentucky State Police (KSP) Post 2 was requested by the Todd County Sheriff’s Department to investigate a shooting on Heltsley Road.

KSP Detectives arrived on scene and found a female deceased from a gunshot wound.  The Todd County Coroner pronounced Deborah McGee, age 57, of Lewisburg, KY, dead at the scene.  Through the course of their investigation, detectives were able to obtain an arrest warrant for Murder on David Odeal Slagle, age 44, of Lewisburg, KY.  Slagle has not been located at this time. He is described as a white male, 5’9″ tall, 145 pounds with brown hair and brown eyes.  He was last seen on KY-107 near the Todd County/Logan County line. If you see, or know the whereabouts of Mr. Slagle, call 911 or 270-676-3313. 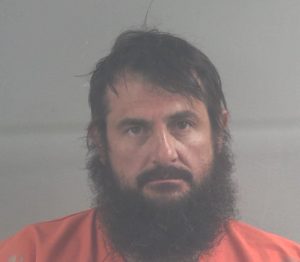