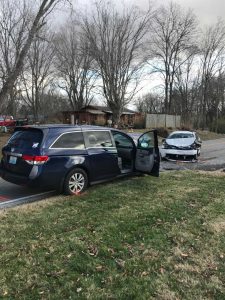 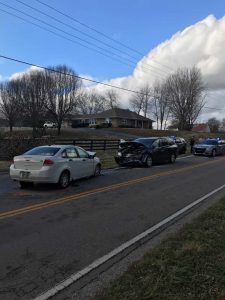 Bowling Green, KY  ( December 28, 2018)- On Friday, December 28th at 11:29 AM (CST) the Kentucky State Police Post 3, Bowling Green received a call for service in reference to a three vehicle injury collision.  The collision had occurred near the 7000 block of Cemetery Road.  Trooper First Class Michael Hatler responded to the collision.

A preliminary investigation has revealed that Jack M. Sikes (64) of Bowling Green, KY was operating a 2003 Chevrolet pickup traveling eastbound on Cemetery Road, when a utility trailer in tow separated from the rear hitch of Sikes’ pickup.  The utility trailer crossed into the westbound travel lane where the trailer struck a 2011 Ford Focus passenger car being operated by Jacquelyn A. Tanero (22) of Glasgow, KY, who was traveling westbound.  Upon impacting the trailer, Tanero’s vehicle crossed the centerline of the roadway, colliding with a 2017 Honda Odyssey van in a head-on manner.  The van was being operated by Doris R. Coleman (60) of Bowling Green, KY.