Sweeden, KY. (February 15, 2020) – Kentucky State Police Post 3 received a call for service regarding an armed robbery that occurred on Saturday morning. Troopers responded to the Z Mart in the Sweeden community of Edmonson County after employees advised the store had been robbed at gunpoint.

Preliminary investigation indicates that at approximately 4:55 A.M. a male brandishing a handgun entered into the Z Mart located at 6353 KY Highway 259 North and demanded cash. He is described as being 5’0″- 5’2″ in height and was wearing black clothing, a black mask and gloves. The investigation is ongoing and currently being led by Detective Courtney Milam. 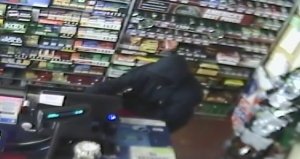