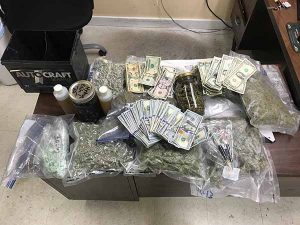 Through investigation, Trooper Lewis discovered West was in possession of nearly 2 pounds of marijuana, marijuana edibles, marijuana liquid extract, and other drug paraphernalia.  A quantity of cash was also seized.

Jeff West was arrested and lodged in the Hart County Detention Center where he was charged with the following:

The case is being led by Trooper Lewis.  He was assisted by the Hart County Sheriff’s Department, Munfordville City Police Department, and troopers with KSP Post 3.   No further information is available for release at this time.