The investigation continues and is currently being led by Trooper Daniel Priddy. 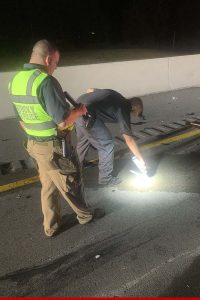 Bonnieville, KY  ( May 25, 2019)-  Saturday evening at 7:49 pm (CST)  the Kentucky State Police Post 3, Bowling Green received a call for service in reference to a two vehicle injury collision involving a passenger van and a tow truck.  The collision had occurred southbound at the 68 mile marker of Interstate 65, approximately 2 miles south of Bonnieville in Hart County.  Trooper Daniel Priddy, along with other KSP personnel, responded to the collision.

A preliminary investigation has revealed that Agustin M. Gonzalez (36, male) of Cary, NC was operating a 2013 Dodge Caravan traveling southbound in the left lane of Interstate 65. An uninvolved non-injury collision had occurred ahead, and the operator of a 2018 International tow truck owned by Crossroads Towing, equipped with yellow caution emergency lights,  had stopped partially in the left lane to assist the involved occupant.  Gonzalez failed to see the stationary tow truck, striking it in a rear end manner.  The tow truck was not occupied at the time of the collision.

The tow truck operator, Jeffrey D. Watkins (55, male) of Rockfield, KY was not injured.   Augustin Gonzalez was pronounced deceased on scene by the Hart County Coroner’s Office. A passenger, Noelle Gonzalez (6, female) was transported to Caverna Memorial Hospital and pronounced deceased by the Hart County Coroner.  A second passenger, Gwendolyn Gonzalez (2, female) was flown to Norton’s Hospital, and later succumbed to injuries sustained in the collision.  A third passenger, Nicholas C. Gonzalez (8, male) was transported to Hardin Memorial Hospital for treatment of minor injuries.  All occupants were restrained at the time of the collision.

The investigation continues and is currently being led by Trooper Daniel Priddy.  He was assisted on scene by other KSP personnel, Hart County Emergency Management, Bonnieville Fire Department, Hart County Coroner’s Office, and Hart County EMS.  No further information is available for release at this time.