Trooper Lewis initiated his emergency equipment to stop the vehicle, but the operator  disregarded and began to flee. Trooper Lewis pursued the vehicle for 2 miles before the operator exited at the 58 mile marker.  The operator lost control of his vehicle and ran off the roadway near the intersection of I-65 and KY218, in the Horse Cave community. The vehicle became disabled and the operator, 26 year old Robert Ford of Atlanta, Ga, and one passenger, 27 year old Cortez Woodruff of Fairburn, Ga, began to run on foot.  Both were apprehended and taken into custody along with a second passenger, 27 year old Kristin Summerour of Fairburn, Ga.  Following the pursuit troopers located approximately 18 pounds of suspected MDMA in the vehicle. The drugs have an estimated street value of 1.2 million dollars.  Ford, Woodruff and Summerour were lodged in the Hart County Jail with the following.

Robert Ford has been charged with:

Cortez Woodruff has been Charged with:

Kristin Summerour has been Charged with: 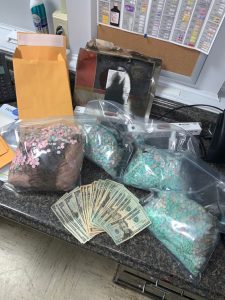