On October 10th at approximately 1:20 a.m. (CDT), Kody Claycomb, 30 of Louisville, reportedly had been taken to Breckinridge Memorial Hospital for examination after a fall in the detention center. While at the hospital, Claycomb assaulted the deputy jailer and fled in a detention center vehicle, a 2015 Chevrolet Traverse. This vehicle was reported not to have any type of radio or weapons inside at the time of the escape.

The Traverse was later located at 4801 US 60 in Breckinridge Co. Claycomb is described as a white male, standing 6’0″, and weighing approximately 180 lbs. He has brown hair and brown eyes. He was last seen wearing orange detention center clothing.

Claycomb was incarcerated at the Breckinridge County Detention Center in Hardinsburg, Kentucky for possession of methamphetamine.

The investigation is being conducted by Trooper Riley Pineiroa. Anyone with information regarding the whereabouts of Claycomb is asked to contact KSP, Post 4 at 270-766-5078.  Citizens may also report tips anonymously through the KSP app.  The app is available for iPhone, iPad, and Android applications and can be easily downloaded free of charge through Apple and Google Play stores. 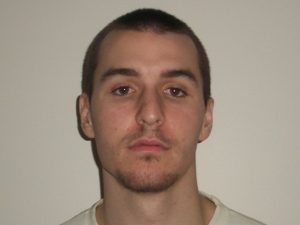