ELIZABETHTOWN, Ky. (July 22, 2022) – Today, the Kentucky State Police (KSP) held its annual civilian awards ceremony honoring 15 civilian employees who excelled in public service and dedication to the agency in 2021. Awards presented include the 2021 Civilian of the Year, Career Achievement, Police Communications Support, Supervisor of the Year and others.

Rocky Adkins, senior advisor to Gov. Andy Beshear attended the ceremony and presented awards to KSP personnel on behalf of the administration.

Civilian employees serve in many different roles at KSP from dispatch, maintenance, drivers testing, information technology, public relations and records support. All of these roles allow KSP troopers and officers to effectively do their jobs to protect Kentuckians and create safer communities.

During the ceremony, KSP Commissioner Phillip Burnett Jr. recognized civilian employees are the link between KSP and the general public. They make sure troopers are able to respond to situations with all the necessary information and knowledge. Those who received awards at the ceremony are among the best, representing all civilian employees across KSP.

“While you may not wear the uniform, you are just as important as anyone else who serves in this agency,” said Commissioner Burnett, Jr. “As a veteran trooper, I can attest that my success is a direct result of your dedicated service and effort.”

Commissioner Burnett and Senior Advisor Adkins presented the 2021 ‘KSP Civilian of the Year’ Award to Hardin County resident Julie Ferguson. Ferguson, a 17-year veteran of the agency, who serves the commonwealth as the KSP Forensic Laboratory Supervisor at the Jefferson Lab in Louisville. Ferguson’s peers nominated her due to her determination, work ethic and willingness to help others, making her a respected leader among the agency. In 2021, Ferguson took on an additional role of interim supervisor at the Western Lab and assisted three other labs with their drug chemistry, blood alcohol and forensic biology.

Commissioner Burnett and Senior Advisor Adkins presented the family of telecommunicator Chuck Stewart with the 2021 ‘Police Communications Support’ Award. Chuck served as a Telecommunicator at Post 4 Elizabethtown and was a 19-year veteran of the agency. On February 27, 2022, Stewart was working in the dispatch center and suffered a fatal heart attack. He was a valued friend, co-worker, and an integral part of KSP. 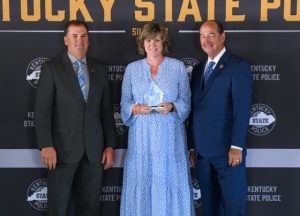 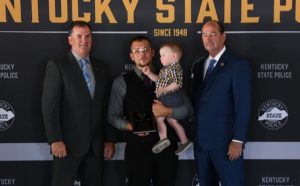