Richmond, KY. (October 28, 2021) – On October 27, Lt. Gov. Jacqueline Coleman joined Kentucky State Police (KSP) to recognize the promotion of 26 troopers and officers who were promoted since May 1, 2021 including one lieutenant colonel, one major, four captains, four lieutenants and 16 sergeants were commissioned with a mission of creating a better Kentucky through public safety efforts and service to all Kentuckians.

Major Michael C. Rogers was promoted to Lieutenant Colonel and is assigned to the Office of Operations.

Trooper Kyle B. Reams was promoted to sergeant and is assigned to Post 7 Richmond.

Trooper Jason Denny was promoted to sergeant and is assigned to Special Operations.

Trooper Larry N. Dales was promoted to sergeant and is assigned to the Executive Security Branch.

KSP Post 7 Captain Jeremy Hamm welcomes Sergeant Reams to Post 7. “We are excited to have Sergeant Reams join our Post in Richmond. He brings several years of experience with him and we look forward to continuing to serve our communities within the post district. 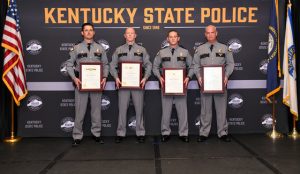