Pikeville, Ky. (May 15, 2022) – In commemoration of National Police Officers Memorial Week, The Kentucky State Police Post 9 Pikeville will honor fallen Troopers on Monday May 16, 2022. KSP Post 9 will do a wreath presentation at the burial site of each fallen Trooper. Friends, family and co-workers of the fallen Troopers are welcome to attend.

Trooper Jerome S. Clifton, age 30, was fatally shot Oct. 1, 1980, while attempting to arrest a shooting suspect in a domestic disturbance incident in Pike County. Trooper Clifton was assigned to Post 9 Pikeville and was a nine-year veteran of the Kentucky State Police. He was survived by his wife and two daughters. He is buried at Davidson Memorial Gardens in Ivel in Floyd County, Ky. In honor of his service and sacrifice, the US 23 railroad bridge between Allen and Dwale has been designated the Trooper Jerome “Butch” Clifton Memorial Bridge.

Trooper Johnny Adkins Post 9, Pikeville, died as a result of injury suffered on November 19, 1995, while attempting to arrest a suspect in Martin County. He is buried at Saltwell Cemetery in Inez, Ky. (November 24, 1995)

Trooper Jonathan Leonard, age 28, was involved in a two vehicle crash on US 119, in the community of Sidney in Pike County. Trooper Leonard was assigned to Post 9 Pikeville and had served with the Kentucky State Police for three years. In honor of his service and sacrifice, KY 468 in Pike County was named the “Trooper Jonathan K. Leonard Highway” in June of 2008. This was by fiscal court resolution. (December 19, 2006) 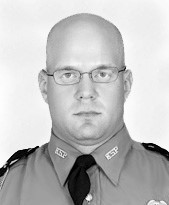 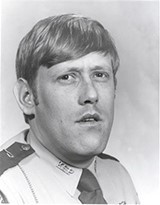 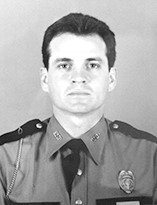