Hager Hill, KY. (August 19, 2021) – Investigators have successfully made an arrest regarding the bank robbery investigation in Floyd County.

Detective Ryan Hamilton with the assistance of the Floyd County Sheriff’s Office, obtained crucial video evidence which led to identifying 61 year old Jeffrey Mullins of Hager Hill as a suspect. Mullins was arrested at his residence and lodged in the Big Sandy Regional Detention Center. Mullins is currently charged with one count of Robbery 1st Degree.

This was a joint effort between federal, state, and local departments to locate and arrest Jeffrey Mullins. We would like to thank the community for their numerous tips during this investigation.

Allen, KY. (August 19, 2021) – The Kentucky State Police Pikeville Post received a 911 call regarding an armed robbery at Community Trust Bank in the Allen community of Floyd County on August 18, 2021 at approximately 09:42 a.m.

KSP investigators responded to the area. The initial investigation indicated an unidentified male entered the building, brandished a firearm from his waistband, and demanded money from the teller. The male subject then fled the scene on foot with an undisclosed amount of cash.

The male is described as 5’9 tall and slender build. He was last seen wearing a blue and white striped button up shirt, baseball cap, glasses, and a medical mask.

Investigators are still searching for the male and asking for the public’s assistance with identifying him.

Detective Ryan Hamilton is leading the investigation. He was assisted on scene by KSP personnel, Floyd County Sheriff’s Office, and Prestonsburg Police Department. 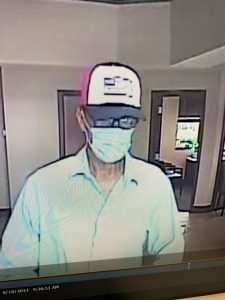