FRANKFORT, Ky. (January 2, 2023) –The Kentucky State Police (KSP) Post 12 troopers in Franklin County, conducted a routine traffic stop for a speeding violation.  Through the investigation, approximately two pounds of methamphetamine was located inside the engine compartment of the vehicle.  Troopers arrested Jarod Lee Nicely of Menifee County and lodged him in the Franklin County Detention Center.  Mr. Nicely was charged with speeding, driving on a suspended operators license, and trafficking in methamphetamine.

While conducting a search of the home, quantities of suspected methamphetamine, prescription medication, and marijuana were seized.  Additionally, drug paraphernalia, firearms, and a sum of cash were seized from the residence. 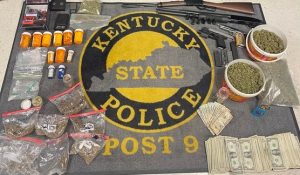